“Learning from the past and educating in the present, we ensure that mass killing will never again be a silent crime”.

Yahad-In Unum (YIU) is a French organization founded to locate the sites of mass graves of Jewish victims of the Nazi mobile killing units, especially the Binsatzgruppen, in Ukraine, Belarus, Russia, Poland and Moldova. It was founded in Paris in 2004 by leaders in the French Catholic and Jewish communities. YIU is led by Father Patrick Desbois, a French Roman Catholic priest whose grandfather was a French soldier deported to the Nazi prison camp Rava-Ruska, located in a Ukrainian town that borders Poland.

From December 14-15, Yahad-In Unum, in partnership with the University of Barcelona held a syposium on “The Soviet Child, the War and the Holocaust” in Barcelona, Spain.

The symposium treated the subject through the lens of different disciplines: history, anthropology, psychoanalysis, literature, neuroscience. It will stimulate reflection and consciousness-raising of the particularities of violence towards children and the place.
they occupy within a genocidal and criminal process as well as a war of extermination. 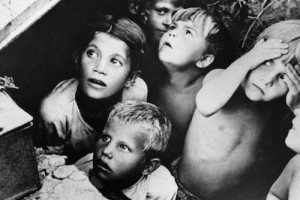 Sorry, this entry is only available in European Spanish and Català.